What’s Wrong with the Trans Texas Corridor and the Concomitant Toll Roads?

A full and satisfactory answer to this question is somewhat complicated. Not that the answer is conceptually complicated, but demonstrating the validity of the answer requires the collation of substantial background information. A relatively easily digestible overview is Barbara’s Minton’s summary published on Natural News in 2008. A detailed, albeit somewhat old, description of what is planned for the Trans Texas Corridor (TTC) can be found in the CorridorWatch.org’s description.

The roots of the Trans Texas Corridor (TTC) are deeply entwined in the North American Union. The motive force driving the TTC is the realization of a political and economic union between Mexico, Canada, and the United States which itself is connected to other global unions. The corridor is part of a greater highway network which bypasses our borders and customs and allows foreign trucks to reach foreign free trade zones throughout the US and into Canada. For example see this CCN story.

The economic purpose is to provide a western Mexican port for Chinese merchandise to be offloaded and transported throughout North America with cheap non-American labor. The political purpose is the subjugation of America. 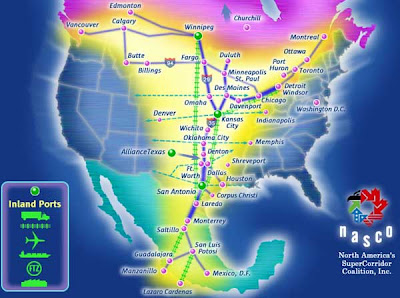 At a local level, the TTC is literally highway robbery. Public Private Partnerships (aka PPP’s) create private monopolies in roads and infrastructure that are analogous to the Federal Reserve’s fiat money monopoly. Roads that have been paid for by tax dollars on land seized by eminent domain are being sold to private companies along with the right to set tolls. If these companies had bought the land with private capital in voluntary transactions with private land owners and then build roads on their land with private capital, then no one would have problem with them collecting whatever tolls they desired for the privilege of driving on their property. Even if they had negotiated voluntary road easements through private land on mutually agreeable terms to the landowner, much like pipeline companies do today when they want to build a transnational pipeline, few would be complaining. But this is not at all what is happening. Public infrastructure, acquired with the sheriff’s gun, is being sold to foreigners who are, in effect, being given taxing power over US citizens. How can other companies compete on a fair basis with the sheriff’s gun? To add insult to injury, citizens must still pay the road tax every time they buy gas, effectively paying twice every time they utilize the toll road. If roads are going to be privatized, all land seized by eminent domain must first be offered back to those from whom it was taken for the same price for which it was taken.
Yes, the subjugation of America is without doubt God’s judgment on a land that has rejected him and his law, sacrificed their children to Moloch, and committed all sorts of abominations in their pursuit of hedonism. But the right response is repentance, not aiding the rape of America families and the theft of American wealth or voting for those who do.
Posted by Peter Allison at 8/05/2011 03:36:00 PM No comments: