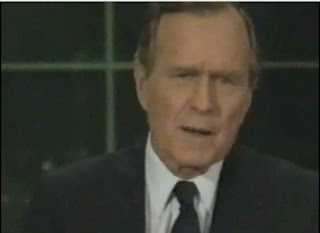 This is an historic moment. We have in this past year made great progress in ending the long era of conflict and cold war. We have before us the opportunity to forge for ourselves and for future generations a new world order -- a world where the rule of law, not the law of the jungle, governs the conduct of nations. When we are successful -- and we will be -- we have a real chance at this new world order, an order in which a credible United Nations can use its peacekeeping role to fulfill the promise and vision of the U.N.'s founders.

Now just what was the promise and vision of the founders of the United Nations that the President claims we are close to implementing?
One logical place to start in answering this question would be the charter of the United Nations. Charters are where founders often tell the world their hopes and vision for the new society they seek to establish.
In Article 43 of the UN charter we read,
Article 43
All Members of the United Nations, in order to contribute to the maintenance of international peace and security, undertake to make available to the Security Council, on its call and in accordance with a special agreement or agreements, armed forces, assistance, and facilities, including rights of passage, necessary for the purpose of maintaining international peace and security.

This means the military forces of the United States, which exist for our common defense and will expend the lives of our own sons, are in fact under the beck and call of unelected aliens who can use them as they see fit. In light of this, it would seem that we should stop referring to the President as the Commander-in-Chief. According to Article 46, the command function of our armed forces is now handled by the UN Security Council with the help of a committee.
Article 46
Plans for the application of armed force shall be made by the Security Council with the assistance of the Military Staff Committee.

If the UN can direct the deployment our armed forces, even requiring rights of passage through our territorial jurisdiction, can we even call ourselves an “independent country” anymore? If the UN can order UN members China and Finland to station troops in Omaha, Nebraska in order to maintain peace and security, how are we any different than occupied Japan in 1946?

To add insult to injury, not only do American soldiers have to jump at the UN’s direction, they have to jump and jump right away. Article 45 requires members to hold national air force contingents immediately available for international enforcement actions.

Maybe you are having a hard time swallowing the implications of this treaty of which the US has been a signatory since WW2. Does the United States really believe this? Have our Presidents actually allowed the UN to command our troops?

The answer is not only yes, but yes, they have done all they can to further this vision. In a keynote address to the UN on September 25,1961 President Kennedy proclaimed his undying loyalty to the vision of the UN founders in these words,

… the recent Belgrade Conference … endorsed a program of "general, complete and strictly an internationally controlled disarmament." It is in this same spirit that we in the United States have labored this year, with a new urgency, and with a new, now statutory agency fully endorsed by the Congress, to find an approach to disarmament which would be so far-reaching, yet realistic, so mutually balanced and beneficial, that it could be accepted by every nation….

The program to be presented to this assembly--for general and complete disarmament under effective international control--moves to bridge the gap between those who insist on a gradual approach and those who talk only of the final and total achievement. It would create machinery to keep the peace as it destroys the machinery of war. …

It [i.e. this Plan] would cover delivery systems as well as weapons. It would ultimately halt their production as well as their testing, their transfer as well as their possession. It would achieve under the eyes of an international disarmament organization, a steady reduction in force, both nuclear and conventional, until it has abolished all armies and all weapons except those needed for internal order and a new United Nations Peace Force. [Emphasis added]

I therefore propose on the basis of this Plan, that disarmament negotiations resume promptly, and continue without interruption until an entire program for general and complete disarmament has not only been agreed but has actually been achieved. …

The plan to which President Kennedy repeatedly refers was released as Department of State Publication 7277, titled, Freedom From War:The United States Program for General and Complete Disarmament in a PeacefulWorld.

If you are unfamiliar with this program, maybe you just forgot to follow President Bush’s infamous admonition to the American people, “Read my lips.” Click here (or the video below) to do so.


By continuing to do many of the same things as President GW Bush, Obama angered many of his strongest supporters. They could not understand why he broke his campaign promises to them.  The reason he broke his campaign promises and has continued doing the same things President Bush was doing is because he is following the same agenda as President Bush was following. As President, Romney has indicated he will also follow the same agenda. He supports the Patriot Act, NDAA, foreign wars, the Federal Reserve, unions of homosexual fornicators, and the murder of some babies.

Every president since Calvin Coolidge has followed this same agenda, some more and some less willingly than others. Every President since Truman (yes even Reagan - remember Beruit?) has committed troops under the auspices of the UN. US troops have served under foreign command wearing foreign uniforms (Remember Michael New ?) since President Bush.

In all likelihood, the next step in implementing this agenda is stationing foreign troops on US soil. OSCE, a regional "UN group" has already been monitoring US elections since 2002. While it is encouraging to learn that they encountered some resistance trying to station foreign observers in Texas polls next week, this is just lip service to placate the naive just like their "support" of the Rep. David Simpson's TSA Anti-groping bill.  If Romney were planning to follow a different agenda in his presidency, he would be supporting Attorney General Greg Abbott. He would be speaking out against the advancement of this agenda, like Ron Paul has consistently done. The fact that he is completely silent on this matter is good evidence that his principles are not based on the constitution or the Truth of God's law.

Labels: NWO
Email ThisBlogThis!Share to TwitterShare to FacebookShare to Pinterest

If Two Men Go Into the Woods Without a Police Officer, How Many Will Come Out Alive?

With this question, Mark R. Crovelli opened a persuasively argued and brilliantly illustrated volley against the Biblical doctrine of the total depravity of man in which he rightly painted Thomas Hobbes' view of the civil magistrate as immoral tyranny.

While Hobbes may not get total depravity exactly right, he is partially right in that man is by nature wicked and if left to his own devices, he will act in all the depraved ways Hobbes describes. But Hobbes is significantly wrong in seeing the power of the civil magistrate as a human power and thinking it can restrain sin apart from the grace of God. The civil magistrate conceived in Hobbes mind ignores God and his law and thus only replaces the decentralized corruption, depravity, and violence of the people with their own centralized corruption, depravity, and violence.  Far from restraining sin, Hobbes’ civil magistrate is an engine of evil, significantly exacerbating injustice and  oppression. When the righteous are in authority, the people rejoice: but when the wicked bear rule, the people mourn. Proverbs 29:2

According to scripture, there is no liberty apart from obedience to the law of God. Perfect liberty is perfect obedience to the law of God. (See this article for a fuller discussion.) Because Hobbes denies God’s law, his civil government can at best trade liberty for security. To the extent any government infringes liberty, it is tyrannical. It is never lawful or moral to infringe liberty. At times my will may be infringed by righteous laws, but in those instances it is my sinful desires that are being infringed, not my liberty. It makes no more sense to infringe liberty for the sake of security or societal stability than it does to poison your food for the sake of your health. If the “poison” improves your health, it’s not poison. We were told airport scanners are analogous to cutting off a gangrenous toe to preserve the rest of the body. But the point of that operation is to cut off gangrene. Airport scanners are like cutting off a good toe so that it doesn't get gangrene – something no lawful doctor would ever do.” (Quoted from here.)

On the other hand Crovelli is very wrong in his view of man as basically good. It is a flat contradiction of scripture (e.g. Rom 3). Pointing to a peaceful day on the Colorado range with some gun toting friends as an example of man’s basically good nature is as naïve and ungrateful as eating a scrumptious Thanksgiving feast and then supposing that the food must have cooked itself because there was no cook in the field of view.  It is the progressive success of the kingdom of God that men’s hearts are brought into submission to the law of God regarding the preservation of their neighbor’s life. This came through the preaching of the gospel over the past five hundred years. Even though his friends may have no knowledge of Jesus Christ, those men were enjoying the fruit of gospel as it has transformed our culture and law.  Men with changed hearts established laws for our body politic that upheld marriage, family wealth (inheritance laws),  industry (laws on theft), truth and so on. This is often referred to as God’s common grace.  These are the crumbs that fall to the dogs from the children at the table.  As our culture has substituted the laws of sinful men for the perfect law of God, we have seen exponential increases in crime. But even today, God’s restraint of sin through the means he has ordained is very great. All men would be wise to acknowledge this as the work of God’s grace and thank him for his restraint of sin. “For although they knew God, they did not honor him as God or give thanks to him, but they became futile in their thinking, and their foolish hearts were darkened.” Romans 1:21. Kiss the Son lest you perish in his wrath. Psalm 2:12

The rainbow is the sign of God's covenant never to destroy the earth again with a flood. As long as earth remains, seed time and harvest, summer and winter, hot and cold, day and night will not cease. Implicit in this promise to sustain the earth is the promise to restrain the wickedness of man so that God's justice does not require a temporal judgment so severe as to destroy the earth. Concurrent with this promise in Genesis 8 is the command for men to shed the blood of those who shed human blood. With this authority  God established the means through which he would accomplish this restraint of evil.

Anyone who thinks this authority unnecessary has no more wisdom or foresight than a pilot who thinks airplane engines are not necessary to sustain flight.
Posted by Peter Allison at 10/15/2012 10:17:00 PM No comments: