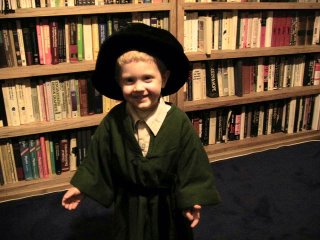 As those with little ones know, the thinking going on in their precious little heads can be downright hilarious at times. Today while cleaning a closet Alice pulled a suitcase out of the closet and put it behind her. 2nd Peter immediately pulled it to his dresser and started packing. When Alice turned around, it was nowhere to be seen. With her Mother's instinct she immediately guessed what might have happened to it. On finding that he had already transferred half his earthly possessions into it, she asked him where he was going. To which he replied, Europe. This proved too good an opportunity for his older brother to pass up. He began the 20 questions routine.

How are you going to get there?

Where are you going to sleep?

Where will you get money?

Whereupon he ran to a dresser drawer that from time to time has contained some extra foreign change. 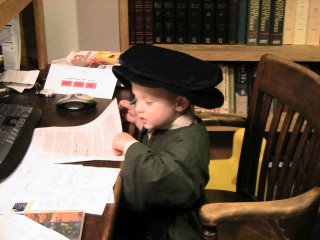 Labels: Family
Email ThisBlogThis!Share to TwitterShare to FacebookShare to Pinterest