The Civil Magistrate and the First Table 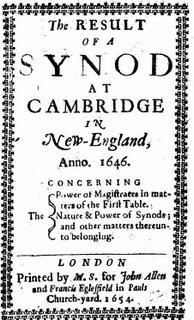 On July 1, 1646 a Synod met at Cambridge, Massachusetts to discuss the following question:

Whether the Civil Magistrate in matters of religion or the first table, hath power civilly to command or forbid things respecting the outward man, which are clearly commanded and forbidden in the word, and to inflict suitable punishments according to the nature of the transgression against the same, and all this with reference to godly peace?

The want of a right stating of this question touching the civil magistrate's power in matters of religion hath occasioned a world of errors, tending to infringe the just power of the magistrate, we shall therefore explain the terms of the questions and then confirm it in the affirmative.