The intramural debate among Christians over third party candidates is underway once again. When I first voted outside the Demoblican party, I don’t remember any serious discussions about such things among Christians. Their response to my third party comments, if there was any at all, was simply, “Huh ???”

But over the 6 intervening presidential election cycles the debate has matured considerably. Now I hear Christians contemplating complicated electioneering strategies (like switching parties to vote for the other party’s worst candidate in the primary in the hope they will win the nomination and set up an easier race in the fall) or asserting that a vote for a good third party candidate is really a vote for the worst candidate. To which my response was, “Huh???”

So in an effort to catch up to my more articulate brothers and sisters on this quadrenially important topic, I sat down tonight, after spending the day painting a large sign for my favorite candidate which will be mounted on the main traffic artery through our town, and tried to improve my contribution to this discussion.
On voting for the candidate who can’t win …

On voting for the lesser of two evils …

Of course, I suspect the real issue is that lesser-of-two-evil voters do not really believe they are choosing the lesser to two evils. They believe they are choosing a basically good candidate who, while qualified for office, is simply not everything they might desire in an ideal candidate.
Whether someone is a qualified candidate (i.e. good) or an unqualified candidate (i.e. evil) who is simply less evil than another depends on the positions and records of each candidate and can‘t be answered by armchair logic. It requires digging into the gritty details. Let's look at main party options.
One option in this election is Barrack Hussein Obama.
There are some professing Christians who think Obama is the best choice for Pro Lifers (e.g., the Matthew 25 Network endorsed by Douglas W. Kmiec, a former assistant attorney general under President Reagen) because under an Obama presidency there would be fewer abortions than under a McCain presidency. The reasoning of these people is that free government health care would reduce the number of unsupported mothers who abort their babies because they are able to properly care for them. In addition better access to birth control would reduce the number of unwanted babies and thus reduce the number of abortions. This sounds a lot like the “A vote for a good third party candidate is a vote for Obama” logic. I don’t think I buy it here either.
A vote for Obama is a vote for someone who believes it’s okay to murder unborn babies.
Another self-professed pro-life, pro-Obama Christian is Frank Schaeffer, son of the late Dr. Francis A. Schaeffer. He thinks Obama is the best candidate for pro-lifers because he would lead the nation to where life is actually valued not just talked about. (See his article Pro-Life and Pro-Obama.) However, that seems hard to reconcile with Obama’s well known voting record on abortion legislation and his comments on the floor of the Illinois Senate against the Illinois born alive legislation that mandated caring for babies born alive despite efforts to kill them in utero (Transcript of Obama's verbal opposition to Born Alive on the IL Senate floor).
What ever else this man believes, he clearly condones the practice of murder and that alone disqualifies him from being a civil magistrate according to Exodus 18:21.
Another option is John McCain, regarded by many as the lesser of two evils.
Some Christians argue that we should vote for him, despite his many weaknesses, because he will appoint better judges. With McCain appointed judges, the argument goes, we’re more likely to maintain our freedom to homeschool, own guns, and evangelize, and there is a better chance Roe v. Wade could be overturned. People can say that our freedoms are safer with a McCain presidency just like Frank Schaeffer can say fewer babies would be aborted under Barrack Obama. But the question is, “What are the facts?”
Here are a few for your consideration:
Seven of the nine Supreme Court justices were appointed by presidential candidates who were deemed the lesser of two evils (Ford, Reagen, Bush, and Bush). It hasn’t resulted in overturning Roe v. Wade. In fact, some of their appointees are even considered “Liberals.”
Under lesser of two evil presidents we have continued to fight unconstitutional and unbiblical wars, preemptively invading other countries for various reasons like possession of weapons of mass destruction. Of course, we have weapons of mass destruction too. Does that mean China is entitled to invade us because they feel threatened by our weapons of mass destruction? If not, then why is it any more right for us to invade Iraq simply because we feel threatened by their weapons?
War involves killing other people. This is Biblical when it is in self-defense. To say a war is not justified is to say we are intentionally killing people without Biblical justification to do so. That’s murder. If the invasion of Iraq was a response to 9/11, why had the President (a lesser of two evils candidate) completed plans for an Iraqi regime change 8 months before September 11, 2001? (See The Price of Loyalty by Ron Suskind, p75, 160.) Obviously the purpose for the war had nothing to with terrorists flying planes into American buildings.
Since McCain has the same foreign policy advisors as President Bush ( See Pat Buchanan's article None Dare Call It Treason ), there is every indication he intends to continue fighting unconstitutional wars.
Under lesser of two evil presidents the absorption of the US military, economy, and legal system into the global military, economy, and legal system has progressed at the same pace as under the “avoid at all cost” Presidents. In fact, if anything, it has proceeded at a faster pace under the Bush regimes than under the Clinton Presidency. 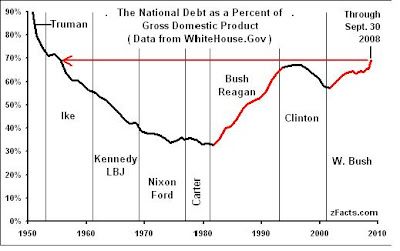 Lesser-of-two-evil presidents have increased the national debt faster than our avoid-at-all-cost President with Reagan and G.W. Bush being the worst offenders. (Graph courtesy of zfacts.com accessed October 11, 2008.)

What expectation is there that McCain will be any different?

A sampling of McCain’s senate votes shows:
According to the Congressional Quarterly, Senator McCain voted with Bush 90% of the time. (see CG Voting Study)
Thinking McCain will be any different than Bush, is like Frank Shaeffer thinking that Obama will lead the nation to where life is valued not just talked about.
His senate voting grade, as best I can gather, is about 45-50%. So obviously he’s made a few good votes as well. But that’s not saying much. The same could probably be said of almost all felons. They’ve probably obeyed as many laws as they have broken. Students that are wrong 50% of the time are considered bad students and are flunked at most schools. Why is it any different for senators?
How about voting for a good candidate? Thankfully we still have that option.
Posted by Peter Allison at 10/11/2008 10:37:00 PM

I agree 100% -- I voted for Chuck Baldwin of the Constitution Party.